As I said in my previous post “Belongings” (3-31-2014), “Dispensing with belongs collected over a lifetime is generally not an easy task.”  Becky Monroe documents the emotionally wrenching process in her blog “An Only Child’s Journey into Parent Care.”  (beginning with Finding Out Who Your Friends Are, 3-24-14).

Check out Susan Diamond’s perspective about downsizing on link below, and then note my comment about photographs. 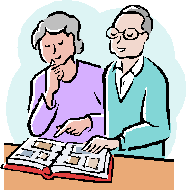 My comment:  Thankfully, my brother and I shared the task of going through my mother’s things. There wasn’t much family history left in her physical belongings. Our father died when we were teens; Mom had moved and downsized a number of times since then. She had her remaining things completely organized, something I think we both appreciated.

This is not to say we did not relive, regret, and grieve—mostly for what could have been, but never was. I took home the box of pictures, which remained packed away for another thirteen years.

When my mother-in-law passed away (after living with us for four years) my husband “inherited” another box of pictures. He divvied them up into five big piles—one for himself, one for his brother, one each for his two sisters, one for the trash.

I agree with what you said: “The most frustrating part was looking at photos of people with no names to identify them.” And also, as you did, I wondered: “What will children of today find in the way of photos when their parents are gone?” (since all the pictures seem to be saved by the gazillions on their various devices).

In the light of my caregiving experience, and with the hope that my children will not have to face avoidable stress, I have pledged that I will not leave my children the burden of my messes (such as boxes of pictures). Therefore, I spent a number of months making picture books to document the history of both sides of our family.

Becky Monroe discusses the issue of what to do with belongings in her March 24, 2014, blog entry:  Finding Out Who Your Friends Are.  Dispensing with belongings collected over a lifetime is generally not an easy task. As I stated in my book, “What to Do about Mama?”

So as hard as it is for your parents to go through an auction, Becky, you can be thankful that your father is taking a proactive approach and not leaving the job solely to you to handle when settling the estate.

Our family has had experiences on both ends of the spectrum.

My mother passed away suddenly, and ironically, less than 24 hours before her first great grandchild was born. My brother was at the hospital for the baby’s birth, but a short while later he was on a plane to Florida (talk about an emotional swing!).  As executor, he had to deal with the immediate concerns of her death and to arrange for the cremation of our mother’s remains. It was not until several weeks later that my brother and I went to Florida to shut down Mom’s double-wide. In the period of a week, we were able to dispose of her belongings, hold an informal get together with her friends, fly to Ohio (our childhood home) and have a service with family and a different group of friends. We were able to accomplish all of this because our mother had everything planned and organized ahead of time. As executor, my brother “just followed the dotted lines.”

My in-laws, who also retired to Florida, had an extensive amount of collectibles from living all over the world during their nearly 50-year marriage.  My father-in-law also died suddenly, and my mother-in-law just couldn’t face the getting-rid-of-things task by herself. She lived by the mantra, “There’s always mañana,” and left her children the daunting task of downsizing and distributing her belongings. After being widowed for ten years, health conditions made it unsafe for her to live in Florida alone. When my husband made the trip down to help her prepare to move to our hometown (and eventually into our home), he became so frustrated with the task at hand that he had everything shipped North and put in storage.

After my mother-in-law passed away, and my caregiving responsibilities ended, I pledged that I would not leave my children the burden of my messes. My husband and I have disposed of everything we don’t need or use. What is left is organized and labeled. Pictures have been mounted into books. An inventory of our belongings has been sent to the children so that they can indicate what they would like to have. The kids have decided that I’m preparing to die—which could not be further from the truth. I’m “only 65” and have 9 wonderful grandchildren that I want to see grow to adulthood. After I sent the inventory to them a second time, and they ignored it again, I just told them they’d have to fight over who gets what. Someday they will understand.

An Only Childs Journey into Parent Care

Every time I think we are starting to get everything in order, something happens.    Over Thanksgiving (yes, almost 4 months ago); I stayed at Mom and Dad’s house.   I sorted.   I packed things for auction.   I took things to charity.   I carried stuff down the treacherous stair that were clearly built before there were standards and building codes.

We were in the house one day, and my dad said, “you better call your friend the auctioneer, otherwise you won’t ever get done with this.”     I asked him a couple of times, are you sure?     mom didn’t want an auction.     He said, there just isn’t a choice.    You need help.    So I spent two weeks around Thanksgiving in that house, sorting and boxing, moving things down the stairs to where we could deal with them.    I met…