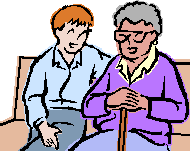 The Overlooked Caregivers No One Ever Talks About
by Connie Siskowski, Blogger President, American Assoc. for Caregiving Youth

Although it was more than five decades ago, the memories of caring for my grandfather as a pre-teen—giving him medication, even bathing him—are never far from my mind. To this day, 54 years later, I can still feel his cold skin as I went to give him his 2:00 am medication.

At that time, words like “abandonment” and “trauma” were not often used to describe childhood experiences.

I left home to become a nurse and grew professionally in my career. However, the traumatic experiences of caregiving and missing out on some of my childhood left me less than grounded.

In 1998, at the First International Conference on Caregiving in London, I learned about the challenges faced by youth caregivers and began to understand the significance of those experiences.

That summer, I went on a mission trip with teens from my church—one boy’s dad had recently died and another girl’s dad had pancreatic cancer. Many of the other kids also had concerns about their parents and grandparents’ health.

In 2001, my new husband, encouraged me to return to school to get my PhD, thinking it would increase my earning power. During the research process, I discovered that there was—for the first time in the U.S.—an unusually high number of middle and high school students who were dealing with family health conditions. More than a third of these children were negatively impacted at school. A few more years would pass, and the data (along with some media attention) revealed that there were between 1.3-1.4 million caregivers, ages 8-18 years old in the US.

In 1998, I had started a nonprofit organization to provide volunteer support services to people who were homebound and their caregiving families. Once the analysis of my research data was complete, I was compelled to now turn my attention to youth caregivers. I thought that, supporting them academically and personally, and strengthening their families, could perhaps ameliorate the sacrifices they were making because of their caregiving responsibilities.

Thus, the Caregiving Youth Project was born in the fall of 2006, at one middle school in Boca Raton, FL. Professional staff facilitate support groups, offer classes on life skills, and provide other resources to ease some of the responsibility and give youth caregivers the chance to be kids.

Over the coming months, I will be sharing with you the experiences and insights of these school-aged caregivers and the men and women who help support them in their endeavors.

I really identify with Connie’s comment, “The traumatic experiences of caregiving and missing out on some of my childhood left me less than grounded,” although in my case, I would have to change the word “caregiving” to, “having a dying parent.”

When at a Caregiving Conference a few years back, I attended a hospice workshop.  A comment was made about the support systems available to children.  When that statement was made, I found myself suddenly in tears.  Oh…if they would only have had something like that when I was a kid!

Like you, Connie,  I grew up during the 50’s and 60’s.  When my father was diagnosed with non-Hodgkins lymphoma, the doctor recommended that he not be told that he had a fatal disease.  My mother did tell my brother and me (15 and 10, respectively), and we were instructed not to tell anyone.  It was a “secret” that was never discussed.  Yes, it was traumatic, and I absolutely felt abandoned.

Thank you for focusing your attention on the children and their needs.  Thank you for helping them maintain their childhood so they do not have to “miss out” on those years as did you and I.

For Women and Men Caring for Loved Ones at Home